The Iron Oath starts with a story of companionship and betrayal, before opening up into a world wracked by a cosmic scourge. This combination of deep lore and personal narrative sold me on the game, as well as its promise of hardcore tactical dungeon-crawling and combat. Let's see what makes it worth checking out.

This is the second of a series of short reviews of Early Access RPG-ish titles that I found worthwhile (see the first article, on Death Trash, here). As mentioned previously, some of these games are ones I backed when they were only a Kickstarter campaign, and The Iron Oath is one of those. During this series I'll try to delve into a bit of description of each game's mechanics as well as their current status in terms of the development roadmap, and give you my take on why you should play it as an RPG fan.

What makes an EA game worthwhile?

During this series, I'll be using the following criteria to decide if the game is worthwhile for those willing to risk an Early Access purchase: 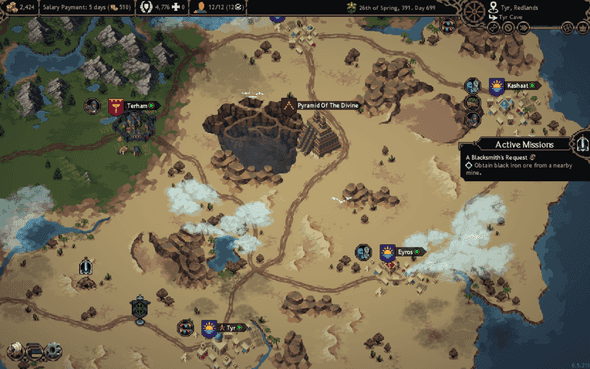 The Iron Oath is a turn-based tactical RPG that promises an engaging experience where the fate of your mercenary company rests on your decisions. The game draws inspiration from classic RPG titles like Darkest Dungeon, Mount & Blade, and various tactics games.

One of the standout features of The Iron Oath is its class system, which offers players a variety of options for customizing your party. These go well beyond the typical D&D classes of warrior, mage and rogue. While the existing classes are interesting, I found that there still isn't quite enough variety to keep things fresh throughout the game, and one or two more classes would spice things up a bit.

Additionally, equipment (especially weapons) are typically usable by only 1-2 classes, and the equipment doesn't seem to matter in obvious ways besides bumping damage/resistance numbers up slightly; there is a lack of rare/unique items that could have added more depth to the gameplay. For example, instead of offering unique artifacts, there are scrolls that you use to upgrade your existing equipment. An interesting mechanic but I'd like to also see legendary equipment as quest rewards.

The dungeon delving mechanics in The Iron Oath are like a combo of Darkest Dungeon and Deep Sky Derelicts. You select a party of four, who can start with varying levels of fatigue based on how recently you've used them in a quest or battle. You then provision them with goods like bandages and health potions. And then you explore the dungeon.

You move through the dungeon by expending turns, either blindly or by taking extra turns to scout ahead. Random encounters leaad you to decide between spending time to disarm traps or scavenge for loot, or risk injury and missed opportunities. Every 20 turns, the dungeon gets more dangerous in a randomized fashion -- tougher traps, lower morale, etc. And you can camp to heal, reset the timers, and buff your party.

I'll admit that it never seemed worthwhile to not take my time in the dungeons, and I also never ran into issues with morale in my party, but I also only took on a handful of higher-level quests. That said, these mechanics did add some tension here and there, except when traversing a dungeon you're overleveled for, which felt a bit rote at times.

While dungeon delving is the bulk of most of the quest content, there are also a handful of more interesting variants. For instance, traversing roads to clear them of bandits or monsters in singular battles, or assassinating a noble on behalf of a warring house.

The latter style of quests seem promising as they can affect situations on the world map. For instance, after completing one assassination quest, the war between the two houses ended -- in the favor of the house whose heir I had just assassinated! Confusing, but I still got paid and a decent amount of reknown.

Speaking of reknown, completing quests will gain reknown points for your band of mercenaries, which you can use as a sort of meta-progression XP. You can enlarge your caravan's capacity (for recruits or equipment), lower the cost of trading, unlock more powerful provisions, or gain more incense (to be used as a buff when camping mid-quest). This is one of the more fleshed-out aspects of the caravan management, which promises to be further improved in later updates to the game.

The main questline in The Iron Oath Early Access seemingly ends after Act 1, which is a bit disappointing, but the side quests that are available so far are quite generic, particularly the low-to-mid level commoner quests (as opposed to, say, the noble assassination quests). However, the mechanics around dungeon delving and exploration of the ever-shifting world map are really cool, and add an extra layer of depth to the game. The lore and world-building in Iron Oath is also quite interesting thus far and factors into the enemies you encounter as well as various events on the world map, though the main plotline mainly focuses on mercenary intrigue thus far.

Combat in The Iron Oath is tactical and can be quite challenging, and the enemy AI and special abilities can often be unpredictable. The fights are at their best when your party is made of complementary classes and abilities that are clicking on all cylinders and working together effectively, but can feel like a chore when you have numerous combats in a row against same-y enemies.

Going through a dungeon can sometimes feel like a chore, especially with an overleveled party, but things can get tense when you start to run out of supplies, and there's a timer mechanic to make dungeons more challenging the more time you spend in them. Overall it's not quite as tense as Darkest Dungeon with its stress mechanics, and could possibly use some tweaking, but it's getting there.

Fortunately, it seems that regular updates are coming out for The Iron Oath still. Furthermore, there was one major update (Fire & Ice) since the EA release, with two more major updates planned before the 1.0 release. The final major update will conclude the main quest, and the minor updates in the meantime are significantly updating the UI and overhauling things like the leveling system, so there's some incentive to keep checking in and to be part of the feedback loop towards the finished game.

Despite a handful of shortcomings, Iron Oath is a game that is definitely worth playing for fans of tactical RPGs. Its unique dungeoneering and world exploration mechanics and interesting class system set it apart from other games in the genre, and the lore and world-building are some of the best I've seen in an Early Access game. The lack of super-intriguing side quests and the sometimes chore-like feeling of dungeon delving are the reason for the 4.5 rather than a perfect 5. With a clear roadmap for updates and improvements, Iron Oath has a lot of potential as it moves towards its 1.0 release and is worth checking out in Early Access.