Death Trash launches you directly into a post-apocalyptic meat-filled, mutated hellscape. Equal parts Cronenberg biohorror and wasteland punk, the art direction and lore absolutely sold the game for me before it even hit EA.

This is to be the first of a series of short reviews of Early Access RPG-ish titles that I found worthwhile. I've backed a few of these prior to release and others I've picked up after their release. I'll omit ones that I found too unfinished or just unappealing (which have fortunately been few and far between), and try to delve into a bit of description of each game's mechanics as well as their current status in terms of the development roadmap.

What makes an EA game worthwhile?

During this series of articles, I'll be using the following criteria to decide if the game is worthwhile in its EA state:

Here, I'll be starting with one of the gems of the E.A. indie world, Death Trash. 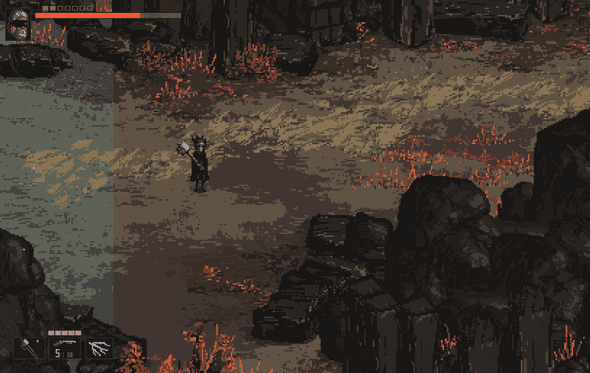 Death Trash is a game that many have compared to Fallout and other classic CRPGs. However, I didn't find the comparison to the original Fallout games to be quite apt. Death Trash is its own thing, not just a Fallout clone. Nor is it a clone of any other game, but it definitely synthesizes elements of other successful RPGs into a lovely chimera.

Despite its familiar isometric viewpoint, its mechanics focus on a combination of risky overworld exploration and even-riskier ARPG-esque combat-or-stealth, a far cry from the turn-based crunch of the original Fallouts. This is only one of the many ways that Death Trash stands out as a singular RPG that merits a look on its own rights rather than being compared to an existing IP. While it does let you resolve conflicts and complete quests using a number of methods rather than straight-up violence, that's not particularly unique to Fallout; rather this reveals Death Trash as one of the handful of gems that actually delivers on the promise of CRPGs to let players play any role they see fit.

Getting back to the combat and stealth mechanics, they are actually quite nice on their own. The fights feel like something out of Hyperlight Drifter, complete with rolling and swapping between ranged, thrown and melee weapons, but with more gore. And as I learned quickly, being stealthy pays off as there are numerous encounters that are best avoided if you don't want to wear out your quicksave button. Even if the game were a straight-up action/stealth title, it would be fun albeit stressful.

What makes it really nice are the lulls between these tense encounters as you discover a new NPC, uncover some new lore or a hidden questline, or stumble across some settlement in the wasteland full of new mysteries. I've played about 10 hours of the game so far (admittedly, most of that being right after launch) and butted up against some unfinished questlines (again, right after launch), but I would bet that it would take another 10-20 hours to see all of the content present in the title even in Early Access. Besides, it has a co-op mode which I'm sure adds to replayability for those of you with friends.

UPDATE (1/4/2023): While the stuff about co-op mode is true, I've put in some more time with the title and can verify that the playtime for the main quest is less than ten hours at this point. Side quests add maybe another 4-6. I'm all out of finishable quests at the moment so outside of random encounters or hidden stuff, I'd say 10-12 hours is likely the ceiling for this version.

Back to the release status. On the Early Access release, the game contained the storyline quests for most of its Chapter One, out of a planned three Chapters. It also contained numerous sidequests, easter eggs, and other content not related to the main storyline -- if I didn't make it clear before, the game is not exactly linear albeit also not quite open-world. The development roadmap as of August 2021 included finishing Chapter Two and releasing it during Early Access, then releasing Chapter Three along with the 1.0 version of the game.

While they seem to be making a ton of progress on Chapters Two and Three, plus other new content, constant improvements and fixes, and fun stuff like modding tools, their newest roadmap doesn't have fixed dates for any of the upcoming content releases, so it is unclear when 1.0 is due. This shouldn't be shocking as it's being done by a small indie studio, and they have made a lot of progress since Early Access so it's only a matter of time. Based on that roadmap, the remaining major content includes at least three new areas. So hold on tight for more Death Trash.

In the end, I gave it a 4.5 out of 5 because I think the game's mechanics are tight and worth trying out, the art direction and worldbuilding is fun as hell, and there's more than enough content to make it worth your while at this point. The missing .5 is largely due to issues related to the roadmap in terms of the main story -- essentially, because there were quite a few questlines left unfinished on launch which remain untouched years later. Furthermore, while the NPCs and narrative seem promising at times, the dialogue trees can be lackluster. Overall, I think the game's development will make it to 1.0 at some point within the next few years and there's enough branching possibilities in the game to make it worth sinking a few hours into now and then revisiting once it hits 1.0.